First Half of July Experiences

The last two weeks have provided some memorable moments. After a relatively quiet Independence Day weekend, I ventured to the Outer Banks with my pal Jim McKee to see Gov't Mule for the second time this year (having seen them in April in Wilmington). They played the outdoor venue at Roanoke Island Festival Park, and despite a steady rain for most of the evening, it was an awesome show. After the show was the real highlight however. As we stood in the parking lot, the last ones waiting for an Uber back to the hotel, the band's tour bus pulled up and stopped, waiting for the remainder of their entourage. Then, Warren Haynes himself got off the bus. He saw us standing there, asked how we were doing, and we approached and had a short, but nice conversation with him. We told him we had been at the Wilmington show, he asked where we were from, and was very appreciative of our attendance. He was a genuinely nice guy and even indulged us for a couple of photos. Now Jim and I begin every conversation with, "Dude. We met Warren Haynes." It really made our night. 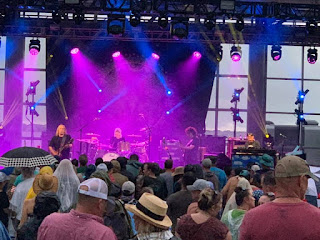 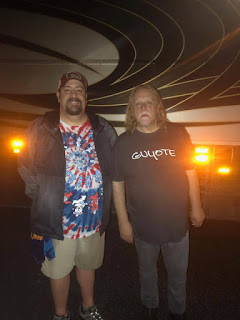 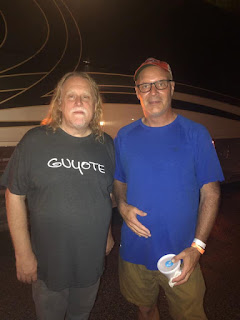 This past Friday night, Laura and I ventured to the State Theater in Greenville to see Songs From the Road Band and The Grass is Dead, a bluegrass Grateful Dead cover band. Songs From the Road was good, but I was really there to see The Grass is Dead and they did not disappoint. Their bluegrass versions of classic Dead songs are really great and I would go see them again.

Finally, on Saturday and Sunday, I played in back-to-back PDGA C-tier disc golf tournaments. Saturday was the Zebulon Cha-ching & Zing tournament. I really enjoy playing at Zebulon Community Park and this was my first time playing this tournament. Tournament Director Chris Dimsdale teamed up with Fly Guy Disc Golf to run the tournament and they had a food truck on site for both breakfast and lunch, which was a nice touch. I enjoyed getting to play the first round with Fly Guy owner and all-around good dude, Hannable "The HP" McGarity. I also got to play both rounds with child phenom and rising 5th grader, Judah Berman. I had heard about this kid, but never even seen him play. Folks, he's legit. The kid can play and as he gets older, stronger, and continues to improve, the disc golf world better keep an eye on him. He's already sponsored by Innova. His dad is a great guy and very good disc golfer in his own right, and I enjoyed getting to know him as well. I shot +12 (69) both rounds and finished 9th out of 16 in my division. My putting was the most consistent its been in months so even though I ended up middle of the pack, I felt good about the tournament.

Sunday it was on to Greenville and the ECO Tour stop at West Meadowbrook Park. Jay Clark's series has become one of the "must play" series in NC. He and his team (Brian Gilmette and others) do a great job each and every time. This course has always been a difficult one for me and over the past two years there have been changes made that have made this course even tougher, stretching it to a par 60. The work that the Greenville Disc Golf Club has put in on this course is amazing and to be commended. Max Crotts, Vince Tricarico, Jarrett Wallace, Jon Upchurch, and ALL of GVDG should be proud of this course. The heat was a factor as the heat index hit around 105. Everyone was worn down and beat when this thing ended (a few folks even left at lunch and didn't return). I shot a +13 (73) and +14 (74), which was disappointing, but good enough to tie for 5th place out of 9 in the division and that was good enough for "last cash."

I played in the Recreational division in both tournaments this weekend. I had been playing in the Amateur Over 40 division, which is as you may guess, an age restricted division. I have never been competitive in that division, as most players in AM40 are much more advanced players than I am. Over the past few years there are a lot of guys in their 40s and 50s who have started playing in the Rec division because like me they are not advanced level players. So I've decided to step down and play most of the remaining tournaments this year in Rec. Maybe I can get my game on track, improve a little bit, and return to AM40 in another year or two. I really enjoy playing with the guys in AM40 - they are all super nice guys. But it wears you down a bit when you are finishing dead last every single tournament. So I'm hoping to improve my game and my frame of mind with the also super nice and fun guys in the Rec division. Next tournament is in two weeks!

Posted by Andrew Duppstadt at 9:43 AM