Finished a Few Books (Two are "Must Have")

I've been plowing through a lot of reading lately, trying to finish some things up. The stack on my desk keeps getting taller, but I have made some progress. I was recently asked to review two books for the Nautical Research Journal, a publication I review books for quite frequently (a dozen reviews over the past decade or so). Along with getting through those two, I finished one I've been working on for a few months now.

R. Thomas Campbell's latest, Confederate Ironclads at War was the first review. If you know Civil War naval history, you know Campbell. He's published no fewer than 20 books and who knows how many articles over the past quarter century. The problem is, he has started recycling a lot of material (and considering that some of his earlier works are out of print that isn't entirely problematic). I'll share the review when it is published, but suffice it to say this book is good, and if you are really interested in Confederate ironclads and don't already own a lot of Campbell's previous works, you may want to pick it up. 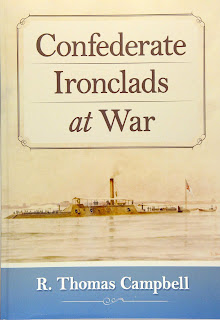 The second review was Our Little Monitor by Anna Gibson Holloway and Jonathan White. Again, I won't spoil the review, but folks, do yourself a favor and get this book! It should have a place on every Civil War bookshelf in America, even if you don't really care much about the naval war. I think it should be THE standard work on the topic for a long time to come. 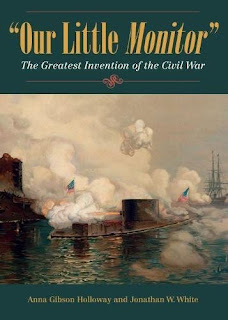 Finally, I was able to finish Hampton Newsome's The Fight for the Old North State and oh my, what a terrific book! There is nothing to dislike about this book. It is the most comprehensive thing written on North Carolina during the first half of 1864. Well-researched, well-written, balanced, and well-illustrated, if this book doesn't win some awards, people simply aren't paying attention. The Conclusion alone is the best summary of the topic one could hope to read. It includes the most detailed coverage of the Battle of Plymouth that you will find anywhere. Newsome's understanding of what was going on in North Carolina during this time is second to none and I encourage ANYONE interested in the Civil War, or even simply North Carolina history, to read this book. It will ultimately give you a better understanding of the time. 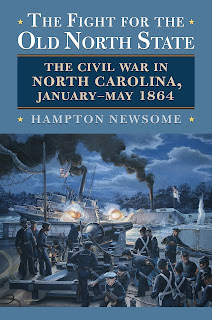 With these three finished, I turn to the stack on my desk and continue on.

Posted by Andrew Duppstadt at 11:20 AM

Email ThisBlogThis!Share to TwitterShare to FacebookShare to Pinterest
Labels: Books