Call me politically correct, but....I have a problem with this

On Friday, November 11 (Veteran's Day), a paid advertisement ran on page 9 of the Jacksonville (NC) Daily News. This ad took up two-thirds of the page, sharing space with the continuation of a local writer's column (the column and the ad had nothing at all to do with one another). The ad consisted of this very "Lost Cause-y" artwork 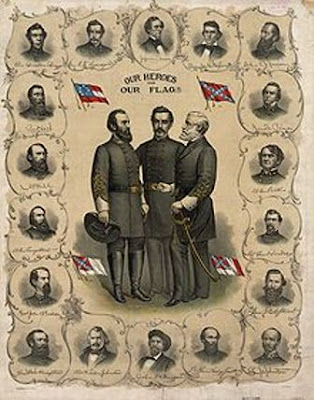 from 1896. Above the image were the words "Remembering all the gallant men who wore the Gray on Veteran's Day - Deo Vindice" and below the image was a quote from Major R.E. Wilson, CSA that simply oozes Lost Cause nostalgia. At the very bottom are the words "Paid for by ....".

The quote by Major Wilson reads, "If I ever disown, repudiate, or apologize for the Cause for which Lee fought and Jackson died, let the lightning's of Heaven rend me, and the scorn of all good men and true women be my portion. Sun, Moon, Stars, all fall on me when I cease to love the Confederacy. 'Tis the cuase, not the fate of the Cause, that is glorious!"

Now, I have absolutely no problem with someone spending their money on an ad such as this. If that's how you choose to allocate your dollars, that's great. What I have a problem with is the fact that it was run on Veteran's Day. Some of you may say that this is a tribute to veterans like any other, but I beg to differ. I feel this ad would be more appropriately run on Confederate Memorial Day. Some of my friends and colleagues will call me a liberal, academic South hater (which, by the way, is an inside joke). Something about this ad just struck me all wrong. Veteran's Day as we know it was established after World War I and I don't see a place for an ad such as this on this holiday. If one truly believes that the Confederate States of America was a sovereign nation, then why would you want to remember its heroes on a day set aside to remember veterans of the United States military?

I don't know why this simple newspaper ad got me so stirred up except to say that its stuff like this that really diminishes my interest in the Civil War. Too many people still fighting it, too many thinking the South will rise again, and a Lost Cause that simply won't get lost. The Civil War encompasses so much of what I do in my job, in my hobby, and in life in general, that I will never fully escape it. I just wish I could escape this side of it and focus on other aspects of it.
Posted by Andrew Duppstadt at 11:51 AM

Email ThisBlogThis!Share to TwitterShare to FacebookShare to Pinterest
Labels: Heritage

The Lost Cause crowd wants it both ways. They are quick to cite federal legislation from the 1950s that formally designates Confederate veterans as U.S. veterans -- which, perhaps not coincidentally, occurred just about the time the last few last Civil War veterans passed away -- if anyone suggests that Confederate veterans were anything less than patriotic Americans.

At the same time, they commonly chafe at the notion of a U.S. flag being put out on their graves on Memorial Day (as is done in my community by the Boy Scouts), with much righteous huffing and puffing along the lines that there is "no greater insult than to put the flag of a man's enemy on his grave," etc. Funny, how they never seem to object when that same "enemy," through the VA, provides the very headstone marking said grave.

It's all very selfish, really -- that all of us are expected to recognize and salute those veterans, but only on terms dictated by the True Defenders of Southron Heritage.

Thanks for the comment, Andy. You are certainly correct in your assessment. And honestly, its probably that hypocrisy that really makes me mad. Just as I would not deny them Confederate Memorial Day (and have even participated in CMD ceremonies int he past), I don't think there's a place for this kind of thing on Veteran's Day.