Normally the month of January is pretty easy going for me, but not this year. Among the regular work responsibilities, I have been working on two articles, a book review, and organizing a two-day PDGA B-Tier disc golf tournament. That's enough to keep anyone hopping.

I just finished up a review of Myron J. Smith's latest book, Ironclad Captains of the Civil War. Smith is a well-known historian of the Civil War's western theater, specifically the brown water navies. This book is well-researched and is a valuable encyclopedia for anyone interested in the Civil War navies. My only real problem is with the publisher, not the author. The price of this book will make it cost-prohibitive for a lot of folks to buy. The paperback volume lists at $75 and the Kindle edition is over $30. Had I not received it free for writing the review, I wouldn't buy it. My review will appear in an upcoming issue of The Nautical Research Journal. Over the years I've written a dozen reviews for this publication, most of them online rather than in print. 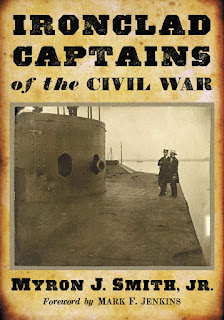 I have also been working on two articles for Civil War Navy magazine. My first article for them was a history of the Confederate ironclad CSS Neuse. Since then, I have produced a sidebar piece to accompany another article about the Confederate capture and destruction of USS Underwriter and am in various stages of completing the current two articles. The first, which is finished and I've received the page proofs of is a biographical piece about Lt. Francis L. Hoge, a Confederate naval officer who ended his career as executive officer of the CSS Neuse. I am really excited to see this article published because Hoge has been a particular interest of mine for a number of years. The second article is being coauthored with an acquaintance from New Bern. He did most of the research and wrote a rough draft, which I have edited extensively, added some information, and gotten formatted for publication. The topic of the article is the US Navy's role in the Battle of New Bern in March 1862. I believe it too will be a good article. The sum total of all these projects amounts to the most writing I've done since graduate school and it's been really refreshing to write something other than book reviews or exhibit text.

Once all of this is finished I'll have another book showing up for review on H-Net. I'll save that for a future post.
Posted by Andrew Duppstadt at 12:44 PM