Moving Day for One of North Carolina's Largest Artifacts

After many years, stalled planning processes, negotiation, hand wringing, and construction the day finally arrived for the remains of the Confederate ironclad gunboat CSS Neuse to be moved to the soon-to-be-climate-controlled facility that is being built as the last resting place and museum for one of North Carolina's largest historic relics. Moving day was yesterday, June 23, 2012 and things got rolling very early. The movers had been on site all week, preparing the ship to be moved, separated into three sections as it was on the previous occasions of moving it. Each section was placed onto house moving dollies that once disconnected from the trucks that pulled them, could be operated via remote control in order to move each piece into place. 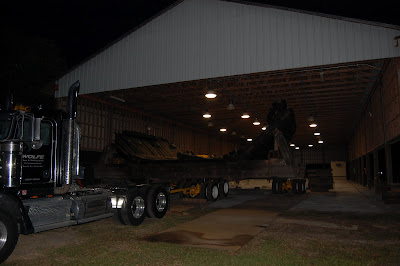 Staff members from the Division of Historic Sites arrived on site at 5:00 a.m. to prepare for the move. A few members of the press were on site to watch the trucks pull out onto West Vernon Avenue and begin the journey to Queen Street. Our Division Director, Keith Hardison was interviewed by the Civil War News prior to the commencement of the activities. A small group of spectators gathered to watch this beginning. It was amazing to see the movers get the three sections of ship out on the road, the smaller guys jumping around underneath each section making adjustments as the trucks were moving. I believe "situational awareness" was the word that was used to describe this process and they proved to be very adept at what they were doing. Photographers and videographers were in place to follow the ship on its entire journey. More press and many more interviews would follow when the ship arrived at the downtown location. 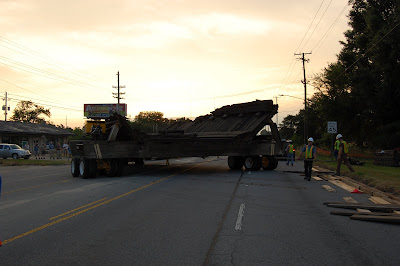 Once the three sections of ship (weighing in at 18 tons, 50 tons, and 39 tons) were all on Queen Street the entire block between Gordon and Caswell Streets was blocked off so the delicate work of getting the sections into the building could begin. There was a much larger crowd of onlookers at the downtown location and many stayed to watch the entire process. One of the best views was from the mezzanine inside the museum building. With great precision and attention to detail the movers got each section moved in, set up, and perfectly aligned below the "ghosting" structure that will be suspended over the hull depicting the outlines of the ship's upper half. The entire thing was done within about 5 hours. Now the construction must be completed and exhibits will have to be built and installed. The hope is to have the building open on a limited basis sometime before the end of the year and hopefully have a grand opening next summer. The work is far from finished, but the biggest piece of the puzzle is now in place. 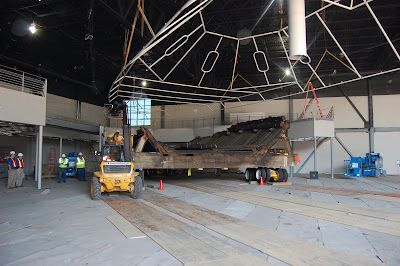 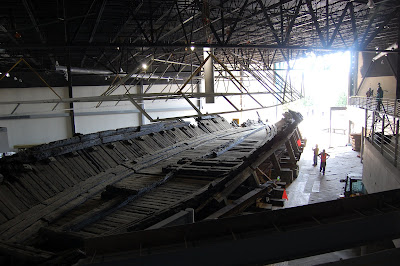 Many people who have worked for many long years around the ship were present to witness the move, some retired and some still working. Unfortunately, Guy Smith, site manager for the past ten years who had overseen most of the process of getting the ship to this point, passed away just a month ago. As the last piece of the ship was moved into place I couldn't help but think of Guy and how I wish he could have been present. His family was present and I am happy that they will be able to see the final result of all the hard work he put into this project. It has been a tough month, with Guy's funeral being held just four weeks ago, but I think yesterday may have brought some closure for me, personally. Guy's legacy, and the legacy of many others who came before him, is going to live on in this new museum. It is definitely overdue for Eugene and Jann Brown (pictured below), Guy, and everyone else who has worked so hard to preserve this one-of-a-kind artifact. 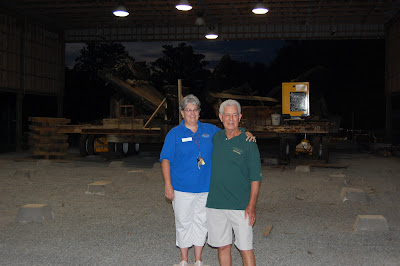 Posted by Andrew Duppstadt at 3:45 PM